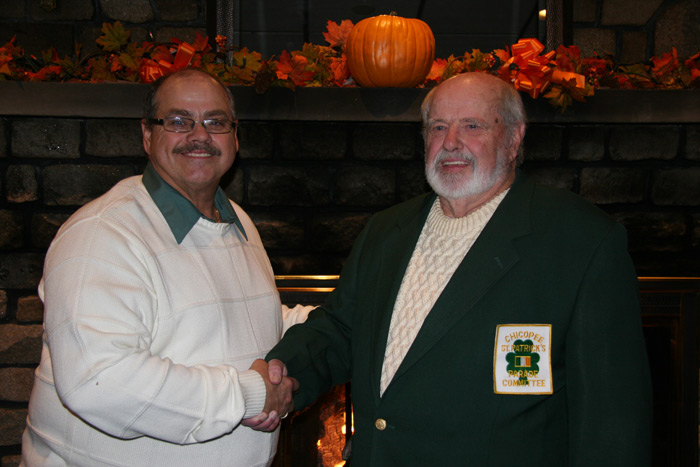 The Chicopee St. Patrick’s Parade Committee has selected Marvin J. Hill as recipient of the 2018 Jack Woods Award. Named after one of the committee’s founding members, it recognizes an individual who has actively served ten or more years. The honor was announced recently by Committee President Edward Kenfield.

Originally from Flint, Michigan, the ninth of eleven children, Hill attended Northern High School and then enlisted in the Air Force where he was stationed in Greenland and then Westover Air Force Base. It was there that he met his late wife, Irene, and settled in Chicopee. Together they shared a daughter, Kathleen, married to Rich Niemiec; and a son Michael, married to Lili Aramali. Hill also has five grandchildren, Thomas, Carly, Persephone, Maxwell and Samuel.

Hill is a third degree and Life Member of the Knights of Columbus Council #69, where he has enjoyed volunteering through the years at the family picnics, spaghetti suppers and bingo nights. He has volunteered with the Connecticut Special Olympics for fifteen years and for FIRST Robotics through International Fuel Cells (a division of United Technologies where he worked for forty years prior to retirement). He has volunteered for the Red Cross and has donated a total of over thirteen gallons of blood. Hill was very active with Boy Scout Troop 132 for many years and is proud to note that his son is an Eagle Scout. He was an active member of the former Assumption Parish and is now a parishioner of Holy Name of Jesus Parish. Hill is an active member of the Moose, Tiger AC, and Eagles 404 clubs in Chicopee and loves to fish, hunt and watch his grandchildren play sports.

In addition to his long list of community activities, Hill has been an active member of the Parade Committee for 17 years, where he has served on the ball committee, helped to build the Colleen’s award-winning float, and volunteered to be the “unofficial” photographer. He has thoroughly enjoyed his participation over the years and was both surprised and honored to have been chosen for the 2018 Woods Award. He looks forward to the committee’s many events and activities leading up to the Holyoke St. Patrick’s Parade in March.

The Chicopee St. Patrick’s Parade Committee organizes the annual Colleen Contest and Coronation Ball, constructs the Colleen’s award-winning float for the Holyoke St. Patrick’s Day Parade, and awards scholarships to young women who plan to further their education at a college or university. The Committee is now recruiting new members and sponsors for this season. Information about upcoming events, as well as applications for the 2018 Colleen Contest, can be found on the Committee’s website at www.chicopeespc.com.